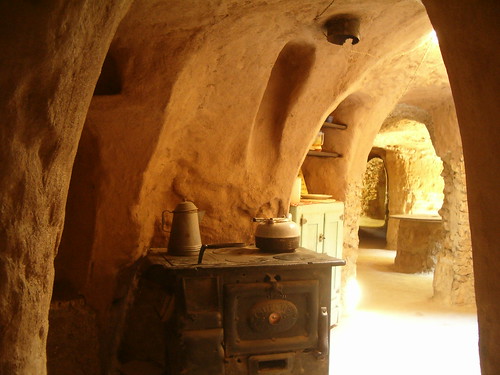 One view of rooms, courtyard and passageways
credit:

Some rights reserved by Matt (mistergoleta)

About a year ago, Debi and I visited an unusual little tourist attraction on the outskirts of Fresno, the Forestiere “Underground Gardens.” The property was a composed of an underground labyrinth of rooms and passageways carved into the earth by an early 20th century immigrant who bought California property, not realizing how difficult the soil would be to plow and farm. He also didn’t understand how hot it got in the Central Valley of California.

So, to escape the heat, he dug down, using the cooler earth to keep himself cool. The passageways were open to the sky, down maybe 15 feet from the surface, so sunlight could illuminate the area during the day. And he added electricity for light and some electrical help during the rest of his time there, too.

The owner, Mr. Forestiere, used catchbasins for water, and groomed hybrid plants and cuttings, creating a verdant underground space … and one which generated fruits and vegetables that he could eat.

The tour, which is led by members of the family of the original owner, are very knowledgeable. They don’t sugar coat the somewhat … how shall I say it? …. nutty quality of the project. After all, this man devoted most of his life to constructing this space, mostly with simple tools and the sweat of his own brow. So, when considering a Central Valley vacation ideas, consider this.

It’s now on the National Register of Historic Places, California Historic Landmark No. 916

FORESTIERE UNDERGROUND GARDENS – “Here, beneath the hot, arid surface of the San Joaquin Valley, Baldasare Forestiere (1879-1946) began in the early 1900s to sculpt a fantastic retreat. Excavating the hardpan by hand, he created a unique complex of underground rooms, passages, and gardens which rambled throughout a ten-acre parcel. His work is being preserved as a living monument to a creative and individualistic spirit unbounded by conventionality.”